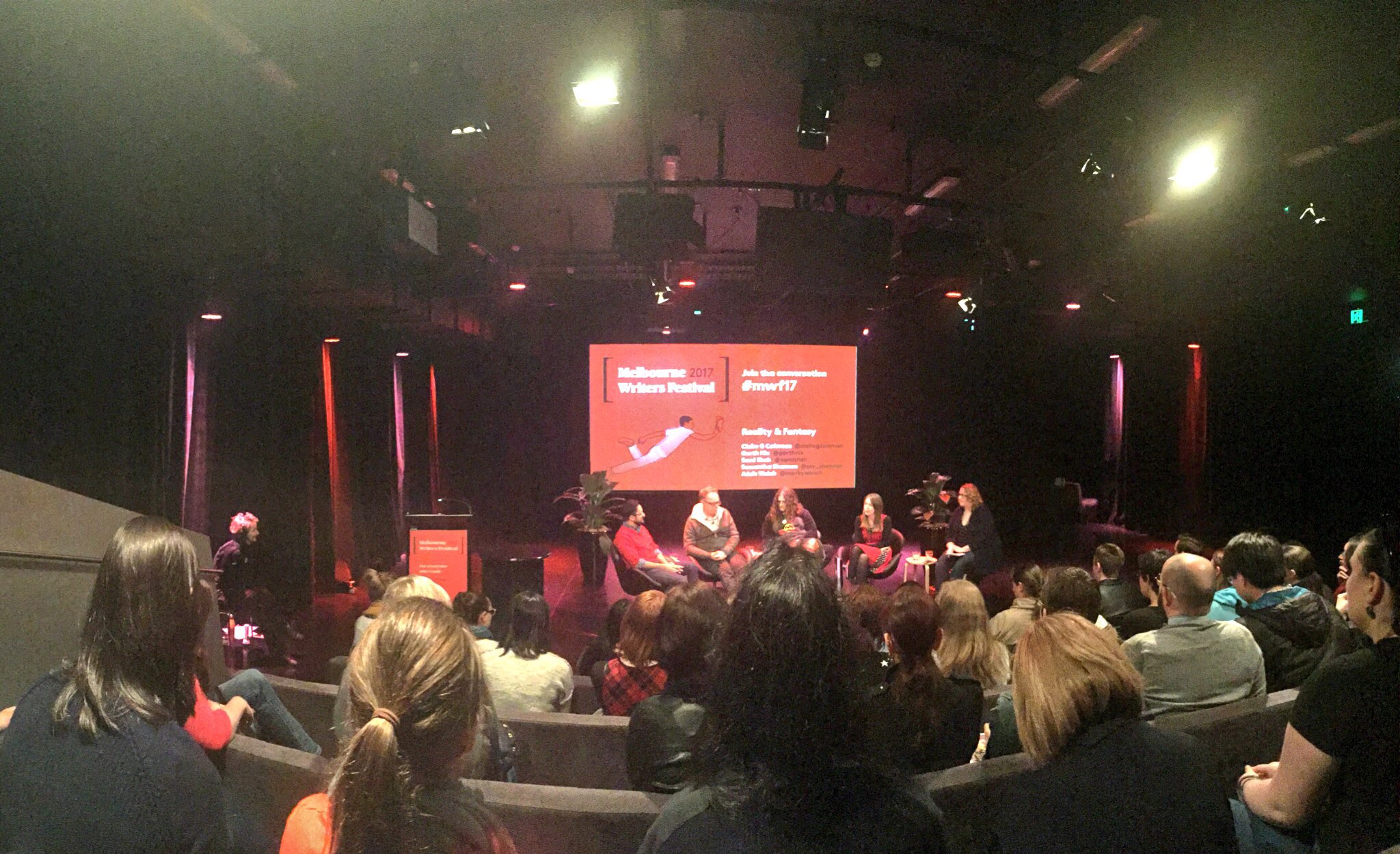 It feels like the Melbourne Writers Festival rolls around quicker each year. As has become tradition, this is my review of yet another year swanning around at #MWF17. (For reference, here are my 2015 & 2016 reviews.

Each year, a strong group of authors come to Melbourne for the Melbourne Writers Festival, and 2017 was no exception. Highlights of course included Angie Thomas (of The Hate U Give fame) turning up, along with a list as long as my arm of A-List authors. I found my sessions were a mixed bag again this year – and often the difference started with the moderation of the panels.

Moderation is key to setting up authors for a win. With insightful questions, thoughtful observations, and gentle steering, a moderator brings a sessions to life. The worst moderator I witnessed barely use the mic and allowed the crowd to interject frequently during the session. At the other end of the moderation spectrum, Danielle Binks & Adele Walsh both adeptly steered the ship of session-wrangling, especially Adele, who clearly pointed out that an audience question is not a statement before anyone had a chance to say “I’ve actually got more of a statement.”

Moderation aside, it’s time for a sprint through some of the sessions I attended. First up, I loved hearing Elizabeth Kostova talk about the stories involving Dracula her father told her whilst travelling in Eastern Europe, and how those formed the basis for The Historian. Top quotes from Elizabeth Kostova:

Elizabeth Kostova spent 10 years working on The Historian 'for her own pleasure'. A solid reminder that good things take time. #MWF17 pic.twitter.com/17McKEnHMb

The Reality & Fantasy session was packed out and felt like it deserved a bigger venue, considering the amazing authors on stage & how fast the session sold out. I had read Samantha Shannon’s The Bone Season coming in, and the panel was a diverse group, often drawn together by the insightful commentary of Garth Nix. My favourite moments:

"Some people say it's a political decision to include a gay character in a story. I say it's political *not* to." –@say_shannon #MWF17 (1/2)

"Anyone who says genre fiction is meaningless doesn't understand how meaning can be hidden in a story." –@GarthNix #MWF17

.@ClaireGColeman says she rewrote a death scene until she cried, because if she wasn't moved by it, readers wouldn't be. #MWF17

The Serial Storytelling seminar during the week didn’t turn up a lot of quotable material, but I enjoyed hearing from Tony Ayres, whose wealth of knowledge around storytelling in visual mediums is astonishing. One quote slipped through:

.@tonyayres – dinner conversation used to be "what books are you reading", now it's "what shows are you watching" #MWF17 #SerialStorytelling

On the second Saturday, I caught the extremely lively debate around The End of Protest. Things got heated at times, but it was a compelling discussion – one of several activism-focused sessions this year, which might signal a change for the festival (which certainly felt more ‘issue’ heavy this year than in 2016). This focus puts MWF in an interesting position as a new Director comes in next year, and it’ll be fascinating to see where things go. Here are some of the best quotes from The End of Protest:

"The bedrock of racism in Australia rests on Terra Nullius." –@Utopiana #MWF17

"We live in the time of the greatest number of protests ever but they're less effective than ever." – @beingMicahWhite #MWF17

The final day of the festival found me running between sessions on Reimagining Literary Figures, The Unmourned (featuring Man Booker Prize winner Tom Keneally), and the #LoveOzYA panel. It was in the midst of this running around that I rediscovered the curious dichotomy that existed at MWF last year, and will likely continue into the future: the tension between the refined, genteel audiences that rock up to hear literary authors at MWF, and the raucous, engaged, youthful crowds that appear whenever a YA event is going down in the same venue. Ending with the #LoveOzYA panel was perfect for me: a reminder that diverse, passionate voices are on the up in Australia – and the future is far brighter for it. There was much laughter in the #LoveOzYA tent – here are a few of the quotes I captured:

"This generation went to Hogwarts together & came out looking for adventures." –@AmieKaufman on the influence of HP today. #MWF17 #LoveOzYA

The #LoveOzYA panel agrees: positive, varied, diverse stories are crucial in YA publishing. There is no monolith experience. #MWF17

And this gem, where the room erupted in mind-explosions:

Also a highlight as a Kiwi: @AmieKaufman recently learning the Hairy MacClary from Donaldson's Dairy is about a dog from a Milk Bar #MWF17 pic.twitter.com/4lirADWyUC

The 2017 Melbourne Writers Festival served up a wide variety of sessions, and not all of them hit the mark for me – perhaps because I’m not the intended audience. The question then remains – who is the intended audience for the future of this great event? It’s a difficult thing to balance MWF’s gargantuan schedule, and the team does it with aplomb. You can’t appeal to everyone, but whatever direction MWF takes in the future, I believe that it’s crucial, and I mean crucial, that spaces for young authors and readers who are passionate about genre fiction aren’t lost or relegated only to school sessions. There’s a special spark in the diversity of genre fiction and YA literature that helps enrich the soul of the Melbourne Writers Festival – and we’d be wise to continue tapping into that energy.

So here’s to the 2018 Melbourne Writers Festival, and all it will bring. I’ll be there again, live-tweeting the best quotes, and saying hi to other authors and readers in the room. A massive thanks to all the staff and volunteers for their efforts to make #MWF17 a standout event. Take a bow, folks.

We’ll see you again next year!