Having moved here six years ago from New Zealand, I can testify to the warmth, diversity, and life this great city exudes. Melbourne’s famous for its coffee, sports, and arts culture, but if you really want to experience the heart and soul of Melbourne, you’ll find it sitting at the top of Swanston street, nestled between La Trobe and Little Lonsdale Streets. That’s where you’ll find the State Library of Victoria – Melbourne’s heart and soul.

There are many things to love about the State Library. Built in the mid-19th century, the State Library is a sprawling repository of all things Victoria, taking up an entire city block with its many secrets and surprises. It also boasts one of the only green spaces in Melbourne’s CBD in front of its impressive frontage – a space where protestors, lovers, and tourists gather – often to observe people playing chess on the giant chessboard, or to watch the trams rumble by. (Plus, who could forget the awesome statues?) 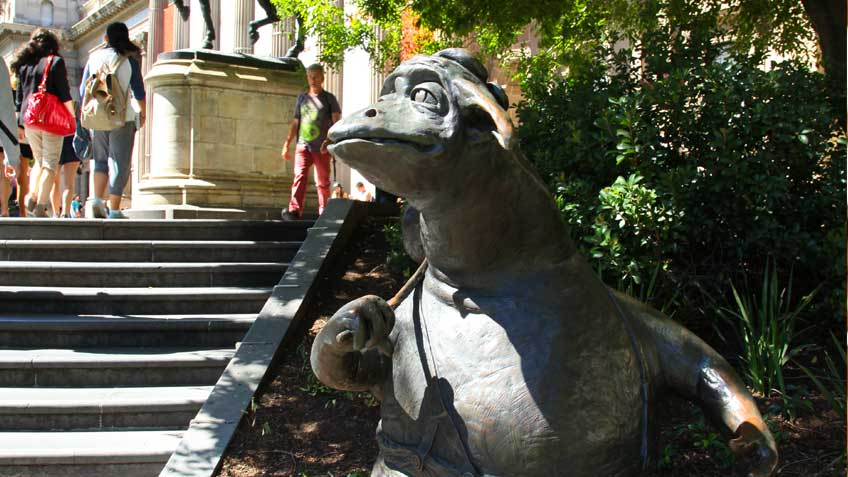 But in case you don’t believe me, here are three reasons why I think the State Library of Victoria is Melbourne’s heart and soul:

The Wheeler Centre for Books, Writing, and Ideas.

In the south wing of the State Library sits The Wheeler Centre, which operates independently from the library and provides a versatile space for small organisations to base themselves from, as well as hosting literary, cultural, and social events. The Wheeler Centre was established after Melbourne became a UNESCO City of Literature, and you’ll find several organisations working out of The Wheeler Centre’s offices – Writers Victoria, Melbourne Writers Festival, and the Small Press Network to name a few. The Wheeler Centre teems with ideas, events, and life, not to forget The Moat – home to many great conversations over fantastic food and drink.

The Dome and public spaces

The State Library features a breathtaking dome at its heart, which echoes the British Museum and the Library of Congress. It’s hard to describe the beauty of sitting under The Dome and writing fiction – but it inspired me so much that I wrote an entire novel whilst sitting beneath its airy majesty. Part of the beauty of the La Trobe Reading Room which sits beneath The Dome is being surrounded by dreamers, writers, and everyday people enjoying the experience of being present in the space.

Throughout the library, there are numerous other spaces where you can sit, write, read, and relax. How many other public spaces are there in Melbourne (with free wifi!) that enable such an atmosphere to exist? Not many. There’s always a seat at the State Library, and all are welcome to sit and take part in the great advancement of human understanding.

It might seem obvious, but the final reason the State Library is Melbourne’s heart and soul is because of what is housed inside. There’s the Cowan Gallery, filled with art; the collections of rare and unique books, and of course, Ned Kelly’s armour. I’m just naming a few of the collections the State Library of Victoria has in its possession – let’s not forget the decades of newspapers, both physical and digitised, as well as historcial documents and records. Whatever you’re into, the State Library can help you find out more about it.

The State Library Victoria is Melbourne: filled with history, sports, arts, and culture, it’s an eclectic building that’s grown and morphed throughout time to reflect changing needs of Victoria’s capital. Whether you’re sipping a coffee at Mr Tulk or in The Moat, or staring up at the dome and taking in the magnificent architecture, you know that you’re in the heart of everything that’s Melbourne.

I’ve only scratched the surface with these examples, because the event spaces, cafes, offices, and opportunities in the State Library are too many to put into one post. The thing is, you shouldn’t just take my word for it. Head down to the State Library. Read a book, write your thoughts down, or just sit and dream for a while.

Because the State Library isn’t just an end in itself; it’s the beginning of a hundred different journeys every day.

One response to “Three Reasons why the State Library of Victoria is the Heart & Soul of Melbourne.”